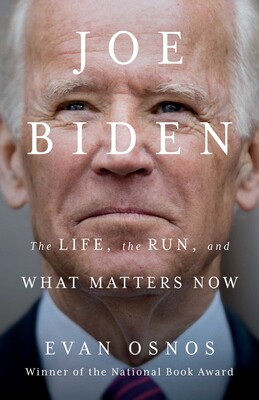 Joseph R Biden – Our 46th President of the United States

Congratulations to our 46th President of the United States, Mr. Joseph R Biden. Please enjoy learning about his life.

Joe Biden: The Life, the Run, and What Matters Now

A concise, brilliant, and trenchant examination of Democratic Nominee Joseph R. Biden Jr.’s lifelong quest for the presidency by National Book Award winner Evan Osnos, adapted from nearly a decade of his reporting for The New Yorker.Former vice president Joseph R. Biden Jr. has been called both the luckiest man and the unluckiest–fortunate to have sustained a fifty-year political career that reached the White House, but also marked by deep personal losses and disappointments that he has suffered.Yet even as Biden’s life has been shaped by drama, it has also been powered by a willingness, rare at the top ranks of politics, to confront his shortcomings, errors, and reversals of fortune. As he says, “Failure at some point in your life is inevitable, but giving up is unforgivable.” His trials have forged in him a deep empathy for others in hardship–an essential quality as he addresses Americans in the nation’s most dire hour in decades.Blending up-close journalism and broader context, Evan Osnos, who won the National Book Award in 2014, draws on his work for The New Yorker to capture the characters and meaning of an extraordinary presidential election. It is based on lengthy interviews with Biden and on revealing conversations with more than a hundred others, including President Barack Obama, Cory Booker, Amy Klobuchar, Pete Buttigieg, and a range of progressive activists, advisers, opponents, and Biden family members.This portrayal illuminates Biden’s long and eventful career in the Senate, his eight years as Obama’s vice president, his sojourn in the political wilderness after being passed over for Hillary Clinton in 2016, his decision to challenge Donald Trump for the presidency, and his choice of Senator Kamala Harris as his running mate.Osnos ponders the difficulties Biden will face if elected and weighs how political circumstances, and changes in the candidate’s thinking, have altered his positions. In this nuanced portrait, Biden emerges as flawed, yet resolute, and tempered by the flame of tragedy–a man who just may be uncannily suited for his moment in history.

JOEY: The Story of Joe Biden

Joey is the first ever picture book about the young life of Joe Biden, the 47th Vice President of the United States, and includes never before told family stories about the presidential candidate and former vice president’s childhood–written by Jill Biden, his spouse.

Joe Biden grew up in Scranton, Pennsylvania, the oldest of four children. His parents always encouraged him and his siblings to be independent and strong. The family moved to Wilmington, Delaware, where at twenty-nine, Biden was elected one the youngest United States Senators ever elected. This is his story.

“(Jill) Biden’s anecdotal portrait of her spouse’s early years spotlights his competitiveness and risk-taking…his role as a peacemaker, devoted brother, and defender of bullied peers…and reveals how…high school, when he became a star athlete and class president, paved the way for leadership roles in college and beyond.” —Publishers Weekly
“Young readers are likely to find inspiration and aspiration in young Joey as a relatable, athletic, and tenacious kid who grew into a civic leader.” —School Library Journal

After years of sharing him with Barack Obama, now you can have handsome and dependable Joe Biden all to yourself in this satirical coloring book for adults

Grab your colored pens and pencils and lose yourself in Hot Cup of Joe, an illustrated coloring fantasy featuring Joe Biden at his real and imagined best. Whether he’s waving to you from his beloved Amtrak train, sailing his boat in a patriotic speedo, or wrestling a bear, he’s always the working-class hero you know and love.

– More than 35 unique, lifelike illustrations of Scranton’s finest
– Let Joe Biden win your vote with his warmth, charm, and integrity
– Trade empty, dirty politics for a meaningful relationship with Mr. Left-of-Right
– Perforated pages let you pin your finished pictures on the wall, just like you pin your hopes and dreams on his leadership

Enjoy this Hot Cup of Joe any way you like it: at home or on the go.

Joe Biden: A Life of Trial and Redemption

Newly updated, the definitive biography of the forty-seventh Vice President of the United States, Joe Biden, which examines the fascinating life of a man who has shaped Washington politics for more than four decades, including his years in the Obama White House.

Raised in the working-class towns of Scranton, Pennsylvania, and Wilmington, Delaware, and with lackluster grades in school and no particular goals, Joe Biden shocked the nation in 1972 when he became one of the youngest elected senators in U.S. history. Over the course of four decades, he carved a legacy for himself as one of the most respected legislators in the country, and was a close friend and partner to President Barack Obama, who valued his vice president’s vast experience in domestic and foreign affairs.

Yet Biden’s political success has been matched by personal tragedy and countless challenges. Within two months of being elected in 1972, Biden lost his wife, Neilia, and his young daughter in a tragic accident–a loss that brought him to the nadir of despair and shook his resolve to stay in politics. He suffered two brain aneurysms and career-threatening gaffes and miscues. In 2015, he lost his eldest son, Beau, to brain cancer. Now, Biden is back in the spotlight as the frontrunner in a crowded Democratic field Defeating challenging Donald Trump in the 2020 presidential election.

In the sequel to the New York Times best-selling novel Hope Never Dies, Obama and Biden reprise their roles as BFFs-turned-detectives as they chase Obama’s stolen cell phone through the streets of Chicago–and right into a vast conspiracy.

Following a long but successful book tour, Joe Biden has one more stop before he can return home: Chicago. His old pal Barack Obama has invited him to meet a wealthy benefactor whose endorsement could turn the tide for Joe if he decides to run for president.

The two friends barely have time to catch up before another mystery lands in their laps: Obama’s prized Blackberry is stolen. When their number-one suspect winds up full of lead on the South Side, the police are content to write it off as just another gangland shooting. But Joe and Obama smell a rat…

Set against the backdrop of a raucous city on St. Patrick’s Day, Joe and Obama race to find the shooter, only to uncover a vast conspiracy that goes deeper than the waters of Lake Michigan–which is exactly where they’ll spend the rest of their retirement if they’re not careful.

Biden: The Obama Years and the Battle for the Soul of America

The visual chronicle of Joe Biden’s eight years as vice president to Barack Obama, revealing in intimate detail who the presumptive 2020 Democratic nominee is as a leader, father, friend, and future President This book captures the core of who Joe Biden is as a lifelong public servant, and who he would be as America’s next President–featuring photographs from his eight years as one of America’s most consequential vice presidents and partner to Barack Obama.
These visually arresting photographs and behind-the-scenes stories show Biden stepping into his own as a leader ready to guide a nation in distress. They also reveal a new dimension to Biden’s humanity–as a man whose decency and kindness shines through both tragedy and triumph, whose working-class roots inform his values, and whose candor and approachability enable him to connect with citizens of all kinds. This book traces Biden’s vice presidency in unprecedented detail, shedding light on who he is as a political leader and patriot, and also as a father, husband, and friend. It will delight and fascinate readers who yearn for the return of honesty and ethics to the nation’s highest offices. As we draw closer to the 2020 presidential elections, this portrait of one of the most influential names in American politics is more timely and important than ever.

No Ordinary Joe: The Life and Career of Joe Biden

No Ordinary Joe: The Life and Career of Joe Biden tells the story of Joseph Robinette Biden, the presumptive Democratic nominee for the 2020 US presidential election. Over the course of his long career, Biden has bounced back from ridiculous gaffes, humiliating scandals, political defeats, unimaginable personal tragedy, and being read the last rites.

Even Biden’s rivals have paid tribute to his incredible capacity to continue through the worst that life can throw at him. If Joe Biden’s latest – and probably final – campaign ends with him becoming the oldest man ever elected as America’s president, it will be his most triumphant comeback of all.

This is the remarkable life of the man who just might become the 46th President of the United States.

Our congratulations again to Joe Biden, The 46th President of the United States of America.